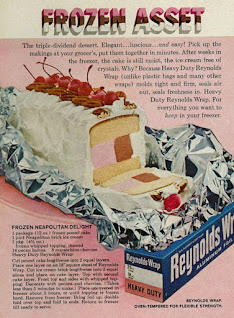 I love Retro Ads & Recipes. Here's one for Reynolds Wrap. I've stuck with many brands from my youth, and I still buy Reynolds Wrap Aluminum Foil. We cal it Silver Foil. There are so many uses, including costumes. One year in Sunday school, I went as a Dime. I divided the dime into all the charitable ways it could be used, and I decorated my dime costume with Aluminum Foil. So you see why this Retro Ad, probably from my childhood, touched me.

Although Italian ice and granita trace their roots to ancient times, Neapolitan ice cream seems to be a 19th century phenomenon. Recipes for the fancy molds (bombes) or bricks of vanilla, chocolate and strawberry (sometimes pistachio) were often included in 19th century European and American cook books. This was a function of technology (refrigeration advancements) and collective gastronomy (preference for complicated presentations). Why "Neapolitan?" The peoples of Napoli are credited for introducing their famous ice creams to the world in the 19th century. At that time, pressed blocks composed of special flavors were trendy. The best ones were made with "Neapolitan-style" ice creams.

A survey of historic cookbooks confirms the term "Neapolitan," as it relates to ice cream, denotes both a recipe (for ice cream) and method (combining several flavors in a mold). It also reveals there is no "official" triumvirate of flavors. Most often cited are vanilla, chocolate, strawberry and pistachio. It is not unusual to include a sherbet or fruit-flavored ice as well.

And here's the recipe for Frozen Neapolitan Delight from the Reynolds Wrap Aluminum Foil Retro Ad: 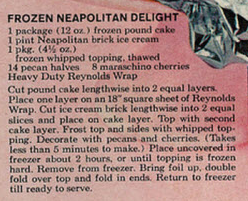