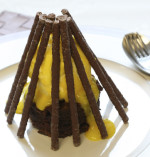 Guy Fawkes Night, aka Bonfire Night, is an annual celebration, primarily in Great Britain, traditionally held on the evening of November 5. Festivities are centered on the use of fireworks and the lighting of bonfires.

Historically, the celebrations mark the anniversary of the failed Gunpowder Plot of November 5, 1605. Guy Fawkes Night originates from the Gunpowder Plot of 1605, a failed conspiracy by a group of provincial English Catholics to assassinate the Protestant King James I of England and replace him with a Catholic head of state. The survival of the king was first celebrated on 5 November 1605, after Guy Fawkes, left in charge of the gunpowder placed underneath the House of Lords, was discovered and arrested.

During the Celebration, an effigy or "guy" representing Fawkes is ritually burnt on the bonfire. There are special foods associated with Guy Fawkes Night, none of them Chocolate, so I was thrilled to find this wonderful recipe on eParenting.co.uk for Bonfire Brownies. This fabulous bonfire stack is built of chocolate brownies, Wall's Cream of Cornish ice cream, chocolate sticks and butterscotch sauce for the fireglow. Because this is a UK holiday, I didn't convert the measurements in this recipe, but you can find several converters on the web. You could always make your own brownies and get your own ice cream and butterscotch sauce! I definitely can't get Wall's Cream of Cornish ice cream, so Haagen Daz will probably have to do! I just found this so charming, I wanted to share it!


Bonfire Brownies
Ingredients for chocolate brownies – makes 6” square – 4 x 3” round or 9 x 2” round
100g plain chocolate – 70% cocoa solids
125g unsalted butter
175g light brown sugar
3 medium eggs
1tsp vanilla extract
80g plain flour
Preheat oven to 140C (fan) gas 3. Melt chocolate and allow to cool. Grease a 6” square deep cake tin and line with non-stick baking parchment. All ingredients should be at room temperature. Beat the butter and sugar together until light and fluffy
Add the eggs a little at a time until all incorporated. Pour in the melted chocolate, beating all the time. Stir in the vanilla and fold in the flour. Spoon into the lined tin and bake for 40 minutes. Allow to cool before removing from tin. Cut out rounds with 3” cutter or 2” cutter

Melt the butter, sugars and syrups together in a saucepan until melted. Continue to heat for 5 minutes. Add the vanilla extract and double cream and heat for 2 minutes until completely smooth.

To serve, place some of the chocolate brownies on a large white plate. Top with a rounded scoop of Wall’s Cream of Cornish ice cream or alternatively Wall’s Soft Scoop Vanilla ice cream. Surround the bonfire stack with 8 chocolate sticks. Pour the hot butterscotch sauce over it all. Insert an indoor sparkler, light as the dessert is brought to the table and serve immediately.

Photo: eParenting.co.uk
Posted by Janet Rudolph at 6:46 AM

This is GORGEOUS! Can't wait to try these bonfire brownies. How creative!

Haven't tried them yet. eParenting in the UK came up with them.. great site, too.

You are KILLING me! Weight Watchers LOVES you!!!

Sometimes I have to shield my eyes from your pics, Janet, for fear of gaining 5 pounds just from looking. :)

Susan and Rosemary: You're very funny. I agree. And your recipes, Janet, never seem to be for things like how to make a meal out of dandelion fluff. They're always fabulous and something I want to run right out and actually try. Of course, the more I try them, the less running I seem to be able to do, but that's okay. Sacrifices must be made.

I just saw these. How amazingly clever! I love desserts that wander a bit from the norm. I'm trying this.