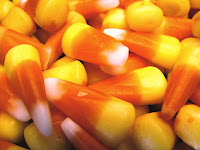 I love candy corn. O.K. it's very sweet, but I only have it a few times a year. So knock me over with a feather if there isn't a National Candy Corn Day! October 30. I shouldn't be surprised. It's an American Halloween tradition. 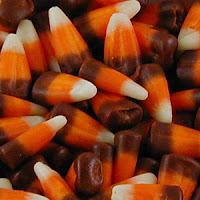 There are a lot of Chocolate Candycorn recipes out there for Halloween:

Elizabeth LaBau has a recipe for Chocolate Candy Corn Bark. You have to love sugar for this one.

And, from Sunset Magazine: Chocolate Candy Corn Truffles. I've adapted this recipe a bit, but not much. Simple to make and delicious. Perfect for Halloween! 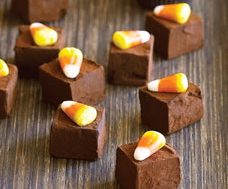 Dark chocolate and bitter orange offset the sweetness of candy corn in these fun but fancy truffles.
Prep and Cook Time: 30 minutes, plus at least 2 1/2 hours to chill.
Notes: You'll need 64 fluted 1-in. paper candy cups for this recipe.
Makes 64 'square' truffles. Be sure you have friends!

Preparation
1. Line an 8- by 8-inch baking pan with a 12- by 17-inch sheet of foil or waxed paper.
2. In a large heatproof bowl set over a saucepan of hot water, use a heatproof spatula or wooden spoon to stir together chocolate, cream, Grand Marnier, and marmalade until chocolate is melted. Scrape chocolate mixture into prepared pan, smoothing top.
3. Chill until firm, at least 2 1/2 hours or (covered with plastic wrap) up to 1 week.
4. Put cocoa powder in a shallow bowl. Remove chocolate mixture from pan. With a long, sharp knife, cut chocolate mixture into 64 squares, each about 3/4 in. wide. Roll squares in cocoa powder to coat; place 1 square in each paper cup.
5. Gently press a candy corn into the top of each truffle. Store between sheets of waxed paper in an airtight container in the refrigerator for up to 2 weeks.
Posted by Janet Rudolph at 9:21 AM