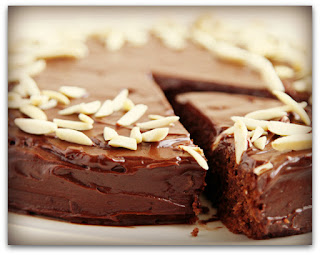 Julia Child writes in "The Way to Cook" that this was the first French cake she ever ate, prepared by co-author Simone Beck, "and I have never forgotten it."

I hope you're enjoying the new HBO Max series Julia as much as I am. Perhaps making this Queen of Sheba Cake will enhance your viewing pleasure.

Ingredients:
4 ounces semi-sweet chocolate (bittersweet may be used)
2 Tbsp rum or coffee
1/4 lb butter at room temperature
2/3 cup plus 2 Tbsp sugar
3 eggs, separated
2/3 cup finely ground almonds
1/4 tsp cream of tartar (the jury is out on whether or not cream of tartar is kosher for Passover--so if in doubt substitute squeeze of lemon juice instead)
1/4 tsp almond extract
1/2 cup cake flour, measured then sifted (for Passover use matzo cake meal--1/3 cup -- or Almond flour)
one good pinch of salt

Directions:
Preheat oven to 350F and place rack in middle.
Melt chocolate and rum or coffee in pot set over simmering water, stirring to combine. Cover, turn off heat, and leave alone. Cream butter and 2/3 cup sugar together until pale yellow and fluffy. Beat in egg yolks until pale and fluffy. Add almond extract.
In separate bowl, beat egg whites on low-to-medium until foamy, then increase speed, adding 1 tablespoon of sugar and 1/4 teaspoon cream of tartar (or squeeze of lemon) until soft peaks form.
Return to melted chocolate and give it a small stir.
Beat in some of butter/yolk mixture a little at a time, stirring constantly so yolks do not curdle. Repeat until all is combined.
Combine almond meal, cake flour, and salt. Add this dry mixture to chocolate mixture, incorporating bits at a time. Then gently fold in egg whites, starting with about 1/2 a cup and working the rest in.
Immediately put 1/2 cup of your batter into each of the six muffin tins. Give a good, hard bang or two on your kitchen counter to level and remove any bubbles in batter.
Bake for 12 minutes, then watch closely until finished. A pale, chocolaty crust should form, but cakes should jiggle a little. Toothpick inserted about an inch from the edges should come out dry, but one poked into the center should not. Remove from oven and let cool for about an hour. When ready to remove from pan, run a sharp knife around the edges of the cakes, invert onto platter.
Top with chocolate glaze or dust with powdered sugar.

Directions
Place chocolate and rum or coffee in small pan, cover, and set in larger pan of almost simmering water. Remove pans from heat and let chocolate melt for 5 minutes or so, until perfectly smooth. Lift chocolate pan out of hot water, and beat in butter a tablespoon at a time. Then beat over the ice and water until chocolate mixture has cooled to spreading consistency.
At once spread it over cake with spatula or knife, and press design of almonds onto icing.

Posted by Janet Rudolph at 7:51 AM