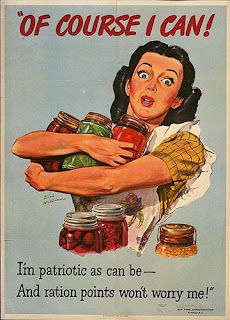 Tomorrow is Veterans Day (aka Remembrance Day, Armistice Day). My father was a decorated Veteran of WWII, so today I'm posting a recipe from that era. Times were hard during the War, on the battlefield, and on the Homefront. This recipe is for Wartime Chocolate Cake. I think it was slightly easier to get sugar and cocoa in the U.S. than other countries, although I've seen several versions of War Time Chocolate Cake in various British war time cookbooks. Milk and eggs were rationed, too, so this cake, which is quite spongy, does without. 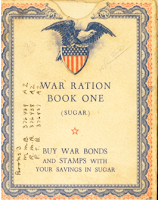 Directions:
In large mixing bowl, mix flour, sugar, cocoa, soda, and salt.
Make three wells in the flour mixture. In one put vanilla; in another the vinegar, and in the third the oil. Pour the cold water over the mixture and stir until moistened.
Pour into 8 x 8-inch pan.
Bake at 350°F. oven for 25 to 30 minutes, or until it springs back when touched lightly.
Posted by Janet Rudolph at 8:23 AM