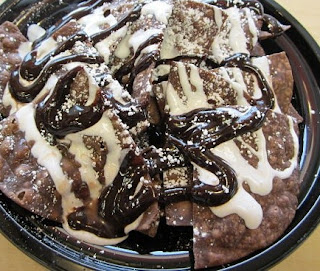 Today is National Nachos Day. Nachos is a Tex-Mex dish from northern Mexico. Nachos is usually comprised of tortilla chips covered with melted cheese and jalapeno peppers and served as a snack. Sometimes Nachos would be served with salsa or guacamole. But this is a Chocolate Blog, so to celebrate today's holiday, make
Chocolate Cinnamon Nachos! This recipe is very slightly adapted from Taste of Home. So easy, too.

Directions
Brush both sides of tortillas with 4 Tbsp butter. Combine 2 Tbsp sugar and cinnamon; sprinkle over one side of each tortilla.
Stack tortillas, sugared side up; cut into 12 wedges.
Arrange in single layer on baking sheets.
Bake at 350° for 12-14 minutes or until crisp.
Meanwhile, in heavy saucepan, combine cream, brown sugar, and remaining butter and sugar. Bring to boil over medium heat, stirring constantly. Cook and stir for 5 minutes or until slightly thickened.
Remove from heat; stir in chocolate and vanilla. Cool slightly.
Arrange half of tortilla wedges on large serving platter.
Drizzle with half of chocolate sauce.
Optional:  Sprinkle with half of the pecans.  (I don't)
Repeat layers.
Posted by Janet Rudolph at 8:48 AM