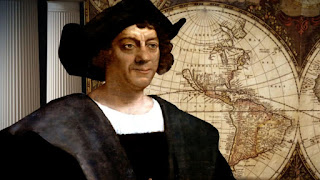 Columbus Day is a huge deal in San Francisco, and even Covid19 and politics have not put the kibosh on celebrations. There won't be a parade this year, but there are several events taking place over the weekend, sponsored by the Italian American Heritage Association. Columbus Day originated as a celebration of Italian-American heritage and was first held in San Francisco on October 12, 1869. In 1892 President Benjamin Harrison, 400 years after Columbus' first journey, gave a public statement in memory of the 'New World' being 'discovered.' In 1905 Colorado was the first State to recognize an official 'Columbus Day'. From 1921 Columbus Day was observed each year. President Franklin Roosevelt in 1937 declared October 12 as 'Columbus Day', but in 1971, Congress proclaimed Columbus Day a national holiday the 2nd Monday of October.

For many, the holiday is a way of both honoring Columbus’ achievements and celebrating Italian-American heritage. But throughout its history, Columbus Day and the man who inspired it have generated controversy, and many alternatives to the holiday have proposed since the 1970s including Indigenous Peoples' Day, now celebrated in a handful of U.S. states.

I originally found this recipe on the Internet in several places, but I've adapted it a bit. I don't like candied cherries, so I use dried cherries. My favorite are from Chukar Cherries. You can't go wrong with Biscotti on Columbus Day or any day. No time to cook? Pick up some Biscotti at your local Italian Bakery or Nonni's White Cherry Chocolate Biscotti.

Posted by Janet Rudolph at 4:12 PM