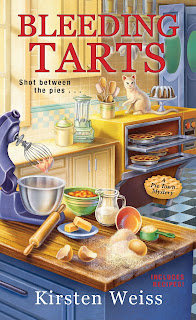 I love when my mystery and chocolate worlds cross. Today I welcome a guest post from Kirsten Weiss, author of Bleeding Tarts, the second in the Pie Town Mystery Series! I love Pie! Kirsten also gives a great recipe for Old-Fashioned Chocolate Pie. Thanks, Kirsten.

The research for Bleeding Tarts, a cozy mystery set in and around a small-town pie shop, was… delicious. Sure, I did plenty of research online, but nothing beats first-person research. That’s especially true when it comes to food.

I’m fortunate to live near some wonderful local pie shops, including Heidi’s Pies in my hometown of San Mateo, in California’s Silicon Valley, and the further afield Petaluma Pie Company and Pie Ranch on the coast. A manager at Heidi’s was kind enough to demonstrate their giant pie oven, with racks that rotate to give each pie a perfectly baked crust. He expertly whisked pies in and out of the oven with a long, wooden paddle, without bothering to stop the rotating racks.

There are no slow movers in pie kitchens.

And fun Silicon Valley fact? National Pie Day, on January 23rd (1-2-3, easy as pie), is a snooze at the local pie shops. But on pi day, March 14th (3.14), the shops are slammed with takeaway orders. Boxes of pies overflow from the counters and onto the diner tables.

But what really bulleted my research forward was not taste-testing at the local pie shops (that just increased my waist line). It was sheer luck.

I discovered that an acquaintance of mine had spent decades working in bakeries big and small. She had great tales to tell – of dropping ten-pound blocks of chocolate from the roof to break it into pieces, of flooding and near electrocutions. More importantly, she was a whiz with pies. She gave me all sorts of insider tips on what a pie shop kitchen would look like – from the recipes stored in plastic envelopes inside three-ring binders, to the black fatigue mats on the floors.

I’m sure I didn’t get every detail right in Pie Town, my imaginary pie shop in mythical San Nicholas, California. But she got me a lot closer. She also gave me some of her favorite pie recipes, which are included in the back of Bleeding Tarts.

Here’s a chocolate pie recipe that’s not included in the book, but it tastes fantastic!

Directions:
Pre-bake your pie crust according to directions.
Using a kitchen whisk beat egg yolks in a pot. Mix in cocoa, cornstarch, sugar, salt and vanilla. Set pot on stove at medium-high heat and stir mixture, adding the milk gradually. Continue stirring until thick and smooth.
Pour into your pre-baked pie shell. Set the pie in the fridge to chill for at least 120 minutes.
Serve slices garnished with whipped cream, if desired.

Old West ghost towns are as American as apple pie. So what better place to sponsor a pie-eating contest than the Bar X, a fake ghost town available for exclusive private events on the edge of Silicon Valley? Valentine Harris is providing the pies, hoping to boost business for her struggling Pie Town shop and become a regular supplier for the Bar X.

But no sooner does she arrive in town than a stray bullet explodes the cherry pie in her hands. And the delicious dessert is not the only victim. Val finds the Bar X bartender shot dead in an alley. Egged on by her flaky friend and pie crust specialist, Charlene, Val aims to draw out the shooter. But solving a real murder in a fake ghost town won't be easy as pie. And if Val doesn't watch her back, her pies won't be the only thing filled full of lead . . . 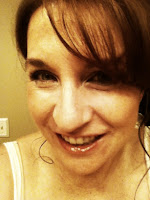 Kirsten Weiss worked overseas for nearly twenty years in the fringes of the former USSR, Africa, and deep in the Afghan war zone. Her experiences abroad not only gave her glimpses into the darkness and light of human nature, but also sparked an interest in the effects of mysticism and mythology, and how both are woven into our daily lives. Now based in San Mateo, CA, she write genre-blending novels: urban fantasy/mystery, steampunk/suspense, and cozy mysteries. The mix just makes things more fun! Kirsten has never met a dessert she didn’t like, and her guilty pleasures are watching "Ghost Whisperer" reruns and drinking red wine.

In May 2018, genre-blending author Kirsten Weiss returns with a brand new culinary cozy mystery to delight dessert-loving readers, BLEEDING TARTS. The second book in her delectable Pie Town Mystery series, BLEEDING TARTS is a light-hearted romp through the fictional Northern California beach town of San Nicholas, CA, which is based on Half Moon Bay, CA. The series sleuth is a small-town pie-shop owner with a penchant for tracking down perps who teams up with her amateur sleuthing club to find a killer after she stumbles across a body. Mix murder with a handful of suspects and a pinch of possible motives, and you have the perfect recipe for a delicious culinary cozy mystery!
Posted by Janet Rudolph at 6:55 AM