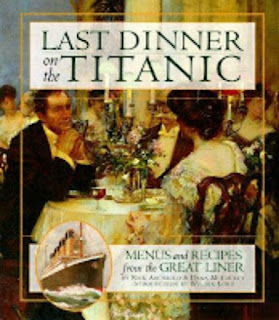 In 2012 for the 100th Anniversary of the Titanic's maiden voyage, many restaurants and special venues held 'memorial' dinners. Many of them replicating the final meal. In terms of Chocolate, the First Class Service that "last" night included Painted Chocolate Eclairs with French Vanilla Ice Cream aka Chocolate Eclairs with Creme Patissiere.  Since today is Titanic Remembrance Day, I thought I'd post the recipe.

At the end of this post, I've included the recipe from the cookbook Last Dinner on the Titanic. This great cookbook includes recipes and facts and Titanic trivia. Originally published for the 85th anniversary of the sinking of Titanic, Rick Archbold and Chef Dana McCauley's Last Dinner On the Titanic: Menus and Recipes from the Great Liner is one part social history, one part recipe book, and one part guide to recreating one of the most famous - and most elegant - dinner parties in recent history. As one critic wrote, it's "A cookbook designed to recreate the atmosphere of dining on the famous, doomed luxury liner serves up such recipes as Lobster Thermidor, Quail's Eggs in Aspic with Caviar, and Poached Salmon with Dilled Mousseline Sauce and Cucumber."

In case you've been living completely off the grid, you will know that in the early hours of the morning, April 15, 1912, the great steamship RMS Titanic met its tragic fate. At 11:30pm on April 14, the state-of-the-art cruise ship that was on its maiden voyage across the Atlantic hit an iceberg, resulting in a 300-foot-wide rip below the waterline. The damage caused the ship to plunge two miles down to the ocean floor, leading to the deaths of more than 1500 passengers and crew members. But without knowledge of the events to come, on the evening of April 14th, the first-class passengers enjoyed what would be their final meal on the ship. And it was an extravagant and decadent meal.


TITANIC FIRST CLASS MENU
As served in the first-class dining saloon of the R.M.S. Titanic on April 14, 1912

The meal was served with a different wine for each course. Following the tenth course, fresh fruits and cheeses were available, followed by coffee and cigars accompanied by port and, if desired, distilled spirits.

Both the pastry and the filling (standard French pastry cream) date back to the Renaissance, when the Arab art of pastry making invaded Europe by way of Italy. Making perfect choux pastry is a skill acquired through practice. Don’t be alarmed if your first attempt tastes better than it looks.
(You can always buy a nice high quality ice cream if you don't have time to make your own)*

Directions
In bowl, whisk together egg yolks and 1/4 cup of sugar for 2 minutes or until pale yellow. Adding flour in 3 additions, stir until well mixed.
In saucepan, heat milk, remaining sugar, and vanilla bean over medium heat, stirring often, for 8 to 10 minutes or until sugar is dissolved and small bubbles are beginning to form around edges of pot. Stirring constantly, pour about one-third of the milk mixture into egg mixture and stir until thoroughly combined.
Pour egg mixture into remaining milk and cook, stirring for 3 to 4 minutes or until mixture begins to bubble. Continue to cook, stirring, for 2 to 3 minutes or until mixture begins to mound and hold its shape; remove from heat. Stir in butter and remove vanilla bean.
Transfer to bowl, cover with plastic wrap touching surface of custard, and cool to room temperature.
Beat whipping cream until stiff; add a large dollop of cream to cooled pastry cream and fold in; add remaining whipped cream and fold in until almost combined.
Transfer to pastry bag fitted with 1/2-inch star tube. Place in refrigerator until completely chilled.

Directions
Meanwhile, in heavy-bottomed saucepan set over high heat, bring water, butter, and salt just to boil. Remove from heat and add flour all at once, stirring vigorously with wooden spoon until mixture comes away from sides of pan, making a smooth ball.
Reduce heat to medium-low and cook flour mixture, stirring constantly, for 2 minutes or until coating begins to form on bottom of pan. Turn into large bowl; stir for 30 seconds.
Make well in middle of dough and, using electric mixer, beat in 4 of the eggs, one at a time, beating well after each addition. Continue beating until mixture is smooth and shiny and holds its shape when lifted.
Place dough into piping bag fitted with 3/4-inch wide tip. On parchment-lined baking sheets, pipe fingers of dough about 4 inches long and 1 wide. In bowl beat together remaining egg and 1 tbsp water; brush each bun lightly, being careful not to drip down sides.
Bake in 425?F oven for 12 minutes; reduce heat to 375 F and bake for 5 minutes longer or until golden brown. With sharp knife, pierce side of each éclair twice. Turn oven off and let éclairs stand for 5 minutes, then remove and cool on rack.
Melt chocolate over barely simmering water. Brush top of each cooled éclair with enough chocolate to coat well. Cool in refrigerator for 5 minutes to harden chocolate.
Halve éclairs lengthwise. Pull out any sticky dough in center; discard. Pipe pastry cream into bottom of each éclair. Replace chocolate-covered tops.
Dust with icing sugar or edible gold flakes just before serving.
Makes 25 to 30 small éclairs.

Posted by Janet Rudolph at 7:28 AM