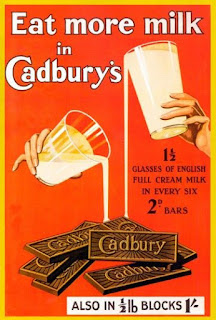 Here's a good explanation from HowStuffWorks.com:

Milk chocolate, the most common eating chocolate in the United States today, actually arrived on the scene fairly late in the history of chocolate.

Milk chocolate's development was made possible with the invention of powdered milk by Swiss chemist Henri Nestlé in 1867. Previous attempts at mixing whole (liquid) milk and chocolate liquor didn't turn out well. But in 1879, a Swiss chocolate manufacturer and neighbor of Nestlé by the name of Daniel Peter decided to try combining the newly invented powdered milk with chocolate liquor -- and true milk chocolate was born.

Milk chocolate is made by combining chocolate liquor, cocoa butter, sugar, flavorings, and sweetened condensed or powdered whole milk (which one is used depends on the individual manufacturer's formula and production methods). The sugar and milk are first blended together, then they're mixed with chocolate liquor and flavorings and dried to create a substance called "milk chocolate crumb." Next, additional cocoa butter is blended with the crumb, and the mixture is sent through the standard conching and refining processes.

Directions
Sift flour, baking soda, baking powder, and salt together in bowl.
In medium heat-proof bowl over barely simmering water, melt chocolate in water, stirring occasionally until perfectly smooth. Remove from heat.
In large mixing bowl, beat butter on medium speed until creamy. Continue beating while sprinkling in granulated and brown sugars, 1 tablespoon at time. Add vanilla and beat until very light. Add eggs one at a time, beating until thoroughly blended after each, then beat until very light and creamy. Blend in chocolate. Add flour in 3 parts by sprinkling over bowl. Alternate with buttermilk in 2 parts. Beat on lowest speed just until each addition disappears. Fold batter with large flexible rubber spatula just until thoroughly blended.
Divide batter into buttered 9-inch round cake pans with bottoms lined with wax paper. Smooth tops, then push batter slightly up against sides. Bake 2 layers on middle oven rack and 1 layer on lower oven rack at 350 degrees. Stagger so top pans are not directly over bottom pan.
Bake until wood pick emerges clean from center of cake, 30 to 35 minutes. Cool in pans on racks 15 minutes. Then turn out onto racks, top sides up, to cool completely.
Up to 6 hours before serving, set thickest layer on platter, bottoms up. Spread with 2/3 cup frosting. Repeat with second layer. Place last layer top side up. Frost top and sides. Keep cool. Do not refrigerate.

Directions
In medium heat-proof bowl over (not touching) barely simmering water, melt chocolate, stirring occasionally until smooth. Remove from heat.
In food processor or mixing bowl, blend sugar and cocoa. Melt butter with 7 Tbsp milk at MEDIUM  in microwave or over low heat.
Add hot butter to sugar with chocolate and vanilla. Process or beat until smooth. Do not overprocess. If too thick, beat in remaining tablespoon hot milk. If too thin, add sugar. Spread at once.
Posted by Janet Rudolph at 8:25 AM