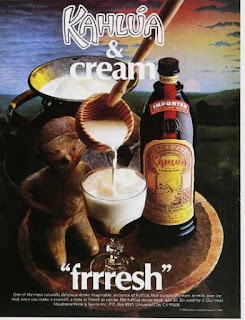 Today is Kahlua Day! Who doesn't like a shot of Kahlua in their coffee or hot chocolate? Kahlua is a coffee liqueur that was first produced in Veracruz in 1926 when a distiller added coffee beans to his rum. In 1964, Kahlua started exporting its product to the United States. Today, Kahlua is one of the most popular liqueurs in the world and for good reason.

Directions
Prepare chocolate crumb crust by mixing together the crumbs, butter & sugar and press firmly into a nine-inch springform pan.
Preheat oven to 350F degrees.
In small saucepan over another saucepan with simmering water, melt chocolate with Kahlua and butter. Stir until smooth. Set aside. Let cool a bit.
In a bowl, combine eggs, sugar, and salt. Add sour cream and blend well.
Add cream cheese to egg mixture. Beat until smooth.
Gradually blend in chocolate mixture.
Fold mixture into prepared crust and bake for 35 minutes or until filling is barely set in center.
Turn off heat and let stand in oven for 15 minutes with door open.
Take out of oven and let stand at room temperature for one hour.
Refrigerate several hours or overnight.
Posted by Janet Rudolph at 7:29 AM